Those of you who follow my FB Group are probably already aware that I was making this mod, for the rest of you I hope you enjoy what it is.

Just to note that some of my skins will need updating for the new mirror changes. Most of them only have a colour so the SCS paint or plastic options can be used.

First up if you are using Maghetto’s origina Scania V4 mod (or my earlier edits/updates) you must remove it before installing this mod.

Removed the side skirts completely. The reason for this is because SCS are working on an update that will allow optional skirts for all trucks. Once the update is released the old mod would have forced the side skirts on all Scania chassis regardless making the mod obsolete.

Removed the side mirror. Many people complained about the side mirror because it was always there regardless of LHD/RHD. I may add it back at a later date with skinnable option to the stock plastic one.

Removed and replaced the wing mirrors. The original version replaced all wing mirrors, they have been removed. Now you will find that the 3 default SCS mirror options work and there is a fourth option for a fully skinnable mirror.

There’s also a version without the grill lights, I know not every one was a fan of them.

As for skinners, I have included appropriate templates. For the most part the template is the same as maghetto’s, but I have made the mirrors larger for better skinning accuracy.

Naturally I included my update earlier in the week that removed those vertical lines on the grill. 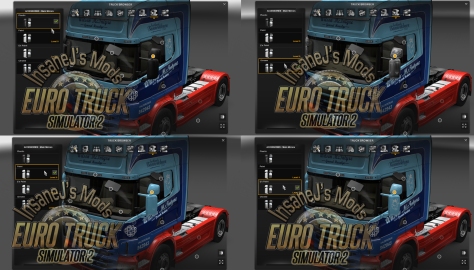 This mod still includes Maghetto’s grill, side panel, and grill lights so partial credit still goes to him for his original work.