So it’s almost the end of the year and I suppose it is only fitting that the final blog post of the year will be the announcement of the final BSM update. And yes I do mean the last BSM update (pretty much).

So first I should probably cover why this will be the last BSM update. It’s fairly simple; there’s really nothing left to add for me. Short of compatibility updates, bug fixes and tweaks, all the main work is done and it’s safe to say that this mod has far exceeded what I had planned when I made my very first Stobart company mod. The only reason to update the mod now is if Stobart bring out a fancy new trailer design. But who knows what the future is going to bring and what may become of the BSM down the line.

So with that news out of the way; let’s move on to the new additions.

First up Oakfield joins the crew pulling both the Elite Dreams trailer and the SCS logs trailer.

Then we have the addition of the Volvo 2009 with four names pulling general Stobart trailers and the Maddie trailer.

There’s also a few extras thrown in for good measure and a few fixes for the “no suitable trailer” error.

So as this the final blog update of 2015, I shall wish you all a Happy New Year and hope to see you early in the new year with some new updates.

Just a note to say the Mercedes MP4 Actros now has an upgraded 720hp engine.

So umm… Yeah. Download it, or don’t, see if I care. *padding, filler, random pithy quote*

This part of the blog has nothing to do with anything.
So you didn’t have to read it.
Thank you.

Due to Ohaha updating his Volvo 2009 tweaks mod into the Volvo Classic standalone mod, I have updated the Stobart Volvo skins to work with Ohaha’s new mod.

I have also updated the Stobart lightbox for the old Volvo so those of you who do use his Volvo mod can have the lightbox back.

Be aware the lightbox will only work for the new standalone Volvo mod, and do remember that you should NOT use the lighbox from the “other mods” page if you also use the main Stobart Skins pack.

I’ve also removed some old def file wheel data that was left over from an early version of the mod.

The IJ’sEngine mod pack has also been updated, 1.22 changes the location of the volvo 2012 indicator sound file which would case the Volvo to have no indicator sounds. This has been fixed.

So the final 2015 update for the BSM is here. This update includes some minor tweaks to fix potential cached materials issues.

The Scania T has it’s own SDC style trailer, the original classic [2] trailer has been given to two new trucks, the DAF and Volvo in classic ESL livery.

The WS Transport truck also has it’s own new curtain side trailer for both player and AI traffic.

I’ve added some new destinations for some of the Stobart cargo so you can now take them to Scandinavian areas.

I have also added a Scania 143m model in classic [70s] Stobart livery purely for the AI to go with the old trailer. Be aware approval for this model is still pending, so it may end up being removed at a later date.

Lily Jean for Stobart rail on the normal roof R and Explore for the Highline Streamline. 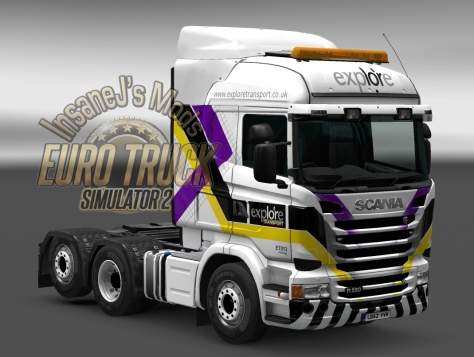 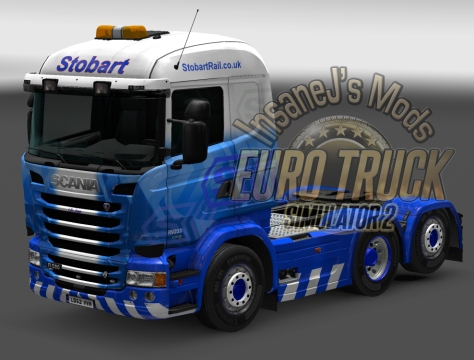 The main AI vans pack has now been updated.

So the last of my public RJL Scania T skins goes 4k.

Also because this skin is quite popular to edit because of the draped Union Flag, I have left the mod open AND included a file called blankway.dds

This file is a version of the skin without any text (so you don’t bugger up the faded parts removing RIDGWAY down the spoiler.) 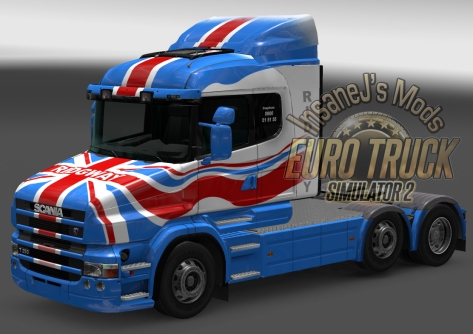 Since I am in 4k mode, I felt it only fair to update Kerry Jane to be with the 4k crowd.

Just to note there has also been a minor skin tweak to this design. For those who already have the skin you will notice the red/amber line at the base of the bonnet has gone, this is an intentional change. Unfortunately because of the mapping of the bonnet it caused the lines on that part to spread and look weird, so I decided to remove it completely from that area.

So I was looking at my old PCH skin on the Scania T and it looked kinda low res so I thought… sod it, it’s getting a 4k update.

There’s a skin for the Normal Cab (usually tankers), the Highline, and the Topline.

Please note that not all parts are painted as I have tried to keep it mostly true to Stobart spec. All skins are in 4k size. 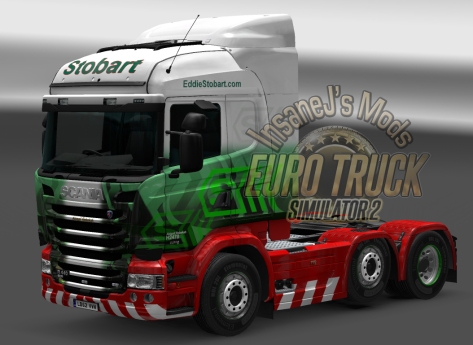 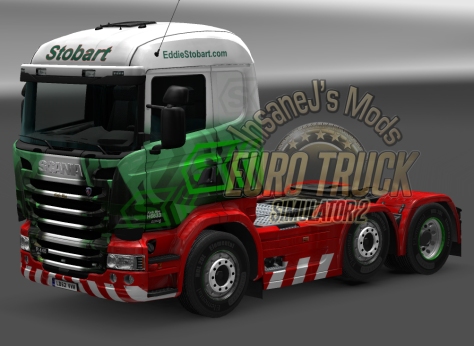