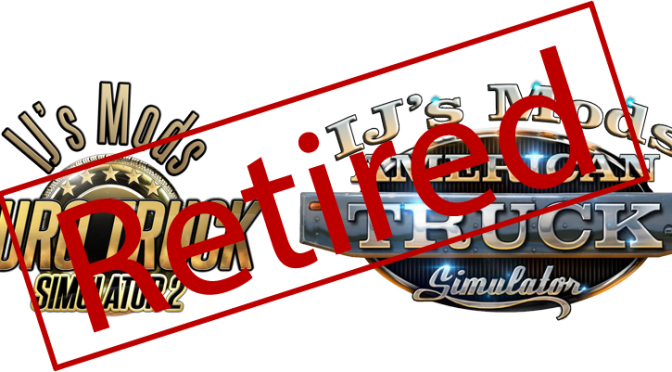 First of all I would like to issue an apology to modhub.us in my previous post I included them along the pirate mod hosters that do not care about the community or the content creators. The mod was initially uploaded by a Russian site (by it’s admin) and copied to several others.

On contact modhub removed the mod without quibble. I unfairly threw you in the mix with the ‘bad eggs’ so I apologise to you.

From here this post is lengthy, sorry not sorry. I do ask you take the time to read it though as it should answer any questions you might have.

Over the past 6 or so months I have been toying with the idea of retiring from public modding.

There are multiple factors that lead me to consider it.

1. I’m a Senior Tester. A lot of my time is spent testing the games, the rest of the time I either want to just drive or do something else entirely.

60% of my time testing is done vanilla, so when I do drive for fun I want to see the mods I care about, and to keep 200+ public mods updated is a ballache of epic proportions and I have to put my own private mods that I care about on the back burner to do it.

Add to that for a minimum of 6 weeks a year (per game) we are testing map DLC (god forbid we ever get two+ maps a year or more per game) and this is more time taken away from playing for fun, although there is always a cross over.

Please don’t read this as me being bitter about being a tester though, I get so much enjoyment from helping to get these games as bug free as possible.

2. I don’t really enjoy skinning any more. There’s no real way to say it softly, but skinning just doesn’t interest me like it used to. I used to see a livery in real life, or while randomly browsing truck related images and think “Ooh, I want that in game”. I just simply don’t have that desire any more.
3. I spend most of my time in Blender. My new shtick is Blender, but I’m not very good with it. Most of what I do just never sees the light of day. Some people may really like the SDC like things I put in the custom trailer mod, but I don’t. I think it’s shite. Yeah, I said it, I don’t think it’s good enough. I guess I’m my own worst critic.
4. Other miscellaneous things. But those things are NOT pirates, mod thieves, and other scum of the community.

I have been modding/skinning for SIX YEARS. It didn’t make it this far by being scarred away by the scummy aspects of the community. Sure they are annoying arseholes and have chased off some of the best modellers out there, but to me they are just a piece of dog shit stuck to one’s shoe, following you around like a bad smell until you can temporarily wipe them off in the grass.

I took the piracy of my Trailer Mod last night hard because I feel it will taint this post, I don’t want people to feel like this scum have won. My retirement has nothing to do with them, it was just really unfortunate timing.

What bothers me most is that these sites make money from my work (and all other modders work). Whether it is through clicks, pay per download, ads on the pages etc. They ARE making money off of us and we as modders don’t see a cent. We do it in our own time and most of us don’t ask for anything in return (and that is generally what we get; nothing). Occasionally someone will throw a fiver or more as a donation, and on behalf of myself and all the modders out there, we genuinely appreciate these donations no matter how small.

You may have noticed my WP site is ad-free right now, that is because of saving up some donations to PAY for this site and make it ad-free for YOU, particularly those of you who visit on mobile sites where the ads are fricken atrocious.  Don’t thank me for that, thank the few donators over the years that allowed me to do it.

Going back to that trailer mod; it started as nothing more than some painted SCS sidecages, it slowly became a “what if I did this?” and blossomed over the course of 3 months. It was never even meant to be public, but it got good feedback on my FB group, so I decided (knowing the risks) to release it. I won’t lie, seeing it pirated within a day did make me feel like never updating it again. But it will be getting one last update to 1.5 with some new content before I return my attention to my AI Vans update.

So yes it sickens me that these scum are making money off of my mod(s), while I rarely see anything at all. I often wonder what would have happened if I had gone the paid mod route…

Where does this leave my site/mods?

Well I guess I should soften the blow with some good news. I’m not going any where. The mods that are currently on my site & Steam will continue to be updated for version compatibility as required. I am not just going to abandon everything.

However it is unlikely I will add any new mods, never say never. I will probably be the Hulk Hogan of the modding community. Every time you think I’m finally gone, there’ll end up being ‘one more mod’.

It’s also unlikely you will see much new content for existing mods. There are some that mean a lot to me (Wychwood for example) that I will no doubt keep updated for personal use, so if an update is required, it might come with new stuff.

SCS Painted AI Vans: These mods will continue as normal. I fully intend to keep making these so long as SCS push out map DLCs. I feel they add a lot to AI traffic, so these will always keep being made so long as I am able to do so (or until SCS take the idea and do it themselves, please SCS do it yourself, I’m begging ya!)

As far as the trailer mod goes, I have readded it to Steam (actually I only made it friends only, it was always there) and I will leave it there. I will not remove any mod from Steam. I’m not going to punish those who like using my mods because of one rotten waste of space.

What about mods that are no longer on the website?

Below is a list of mods that have been removed. However that doesn’t mean they won’t return, whether they come back depends on YOU at this point. If you think a mod is missing from the list feel free to mention it.

If you would like to see any of these mods return, name them. You have up to three picks, you can do so here and on FB (so the smart ones amongst you will cheat and get at least 6). The more picks a pack gets, the more likely I will update it.

Any that get no mentions at all will probably never see the light of day again.

These mods are not updated for 1.32+ so you should probably remove them.

People who read to the end… Anyone? Hello?