First up; all ATS mods have been updated. However I have taken the decision to only support ATS mods on the Steam Workshop. If you previously used the offline versions you will need to switch to Steam Workshop versions.

Click here to be taken to my Steam Workshop Page for ATS.

Next up; all the Painted AI Vans in SCS company liveries mods have been completely reworked from scratch. All models in these packs are now SCS models that I have UVmapped personally. (Previously the old transit used Jazzycat’s models.)

As part of the rework, the companies are now split between the old Transit, the 2016 Transit, and the Peugeot Boxer. A similar update will come to the real replica vans at a later date.

Next up we have a brand new addition to the page, Anhalt Logistics (combo).

Anhalt contains a skin for the new Scania, two cisterns, and Fridge, and AI combo. This mod is designed for game version 1.31 and above only as it uses the new cables system.

AIM, Allinson, and Wychwood brewery mods have also been updated for 1.31 cables. Wychwood has also received a AI truck rework (now fully Blender Tools made) and has 10 new trailers.

Please note: I do not consider cables to be an important update, so I have no plan to rush out updates for cable connections. Non-updated trailers will continue to function without issue, but they will not have cables visible when connected.

Some of my older mods really need some TLC, while I did a quick BT convert of old B2SCS made AI trucks, they still need to be updated with BT made models. So my goal over the coming months is to update all my old mods, make them all AI combos, all models being BT made and as I go they will get the cable connections added to trailers.

Be aware that I do have over 200 mods, so I will be doing them in alphabetical order to make sure nothing is missed this time around.

First up the BANKS of England, Horseshoe/Laysoft, and RR Transport trucks/trailers have been moved to the Combo Skins page as mentioned earlier.

For those of you paying attention you may have noticed I mentioned there being two versions of ex-Stobarts. The first version will be as expected white trucks with the lower red part & chevrons and will be called “clean”.

The second version of the pack will be called dirty and the trucks will look like this:

If you look carefully the areas where there were logos/truck name you can still make out the designs, giving it the appearance that the decals have been pealed off and the truck has not been resprayed to hide the colour difference between the old white and paint kept fresh under the decals.

I know it’s a very minor thing, but what they hell. If I’m going to make ex-Stobarts I’m gonna do it right. The clean and dirty packs will be compatible with each other for those who want to try both.

Well it’s November now, with CiN on Friday 14th here’s a little peek at the named side of the trailer.

So one of the projects I have been working on is a WS Transportation skin.

Very much still a W.I.P but I think we’re getting there.

First of all I have updated the Glendinning truck so that it now has the correct font.

The main reason for the lack of updates is due to playing with a few trailer mods, so my time is being spent playing with those.

One of these models will also be joining the BSM and may also be included in the BMM.

This trailer will not be added as a new trailer, but as a replacement for the “Green Solid” variant.

So with the 1.9 patch out (up to 1.9.2s last I checked) I have been hard at work updating my mods that include stand alone trailers, to fix incorrectly indexed wheel pointers in Blender.

At the time of writing both my Red Bull and Buckfast mods have been updated, but I am waiting on The Big Stobart Mod as I am intended to also add two new trailers.

Here’s a sneak peak at one of them.

So I finally got around to finishing the Malcolm Scania skin.

For the time being this will remain private, but I may release it at a later date.

Now I’ve got this out of the way I can focus more on some other private projects, hopefully I will finish some of these private requests before the end of March!

One of the projects I have been working on.

I should note: this mod will not be publicly available. It is a personal mod only. But it is a project that has been taking up some of my free time.

The latest custom skin request for a VTC. 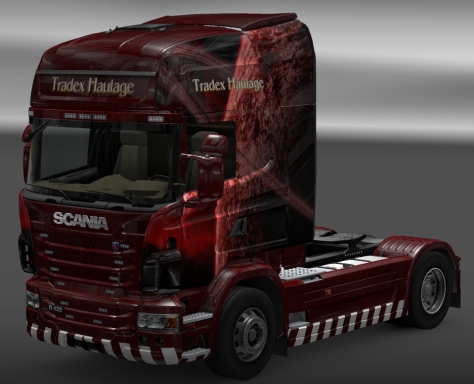 Currently working on the rugby league trailer; there will be a few other tweaks to the existing Tesco cargo (removal of a couple of things) as well when this is released.

As far as the Biomass updates go, it doesn’t look like that will be happening for a little while. I am having a little trouble making the reefer work correctly in the game. So for now it will have to remain on the cool-liner/fridge.

Also I have updated the Borje Jonsson trailer so the back doors are white with the BJ logos on each door.