So yesterday I decided to see if Win11 insider build would install on my old laptop. Considering it’s an old HP with a 5th gen i3, 6gb of mismatched RAM and TPM 1.2 at best I wasn’t expecting much.

Surprisingly it installed just fine. No issues what so ever. So much for MS’s bullshit requirements eh? 🤣

END_OF_DOCUMENT_TOKEN_TO_BE_REPLACED

For those not yet using the 1.41 beta, all my trailers have issues because of a location change that SCS made with trailer parts/materials/textures.

Mods that I have updated yesterday and on the workshop are already fixed for this issue and they are the most popular mods.

END_OF_DOCUMENT_TOKEN_TO_BE_REPLACED

The majority of mods are updated now and available for 1.40.

Please note the PSG mod and the F1 mod are not updated yet as these will require the mod amount of work. With any luck they will be ready next week.

See below for a list of changes. Everything listed has changes for 1.40 unless specifically stated other wise.

END_OF_DOCUMENT_TOKEN_TO_BE_REPLACED

Over the past few days I have been pushing out all my ATS/ETS2 updates on the workshop for 1.40.

Hopefully I haven’t missed anything, if I have do let me know. I won’t list the changes here as they are always listed on the workshop, some packs got new stuff, others just got 1.40 related changes and fixes.

As far as the mods available here go, I don’t plan to start releasing those updates until OB officially ends. That said I already have 25 ready to go and 10 is a WIP state.

The Colton mod has had an update pushed through to fix the broken shop icon.

Also congrats to the winners of the Colorado DLC give-a-way.

The new Gutenberg block editor is hideous and shit. I am legit considering dropping WordPress completely and looking else where. But for now the classic editor will do.

More importantly Brooks Bros is now released. It would have been yesterday but I was distracting with flying planes in the new MS Flight Sim. So ner.

So I have decided to dabble with the idea of Patreon and reopening private requests. However there will be some major changes in how I deal with requests compared to how I previously did them.

END_OF_DOCUMENT_TOKEN_TO_BE_REPLACED

With Road to the Black Sea releasing today I have some mods to release along side it.

First up PSG, PSG defunct, Allinson, BSM, and ATL have all had updates for bug fixing, trailer tweaking, and paint jobs tweaking.

Also coming later today is the RttBS SCS painted company vans. The mod is already on workshop as private and will go public as soon as the DLC launches.

As an FYI I will be updating all my mods on Workshop once 1.36 for ETS2 goes full public to remove support for 1.34 game versions and older. Truck Parts Pack has already removed 1.34 support.

The truck accessory pack has been updated on Steam. It now includes a custom MP4 painted sunshield and a fixed version of the MP4 DLC sunshield.

For some reason SCS did not line up the templates for the DLC sunshields properly so if you have a patterned visor that lines up with the roof, then it will only work on either the EU or UK variant (depending on which you skinned for) and the other will be misaligned.

My version replaces the EU sunshield so the template is centre aligned. 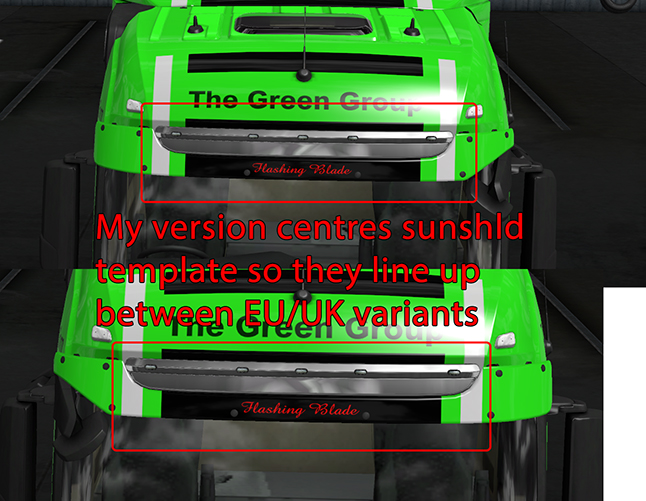 This mod does NOT replace the SCS sunvisor model, ir adds a new one in the shop.